Insulin levels do NOT directly affect the ability to lose fat in overweight, obese, unhealthy, or older humans.

Insulin being THE hormone that determines what happens with weight is popular lately, due to the resurgence of the Keto diet. Is insulin THE hormone? No! Directly connected to this is carbohydrate intake as this is the macronutrient that elicits insulin release (protein does as well but often to a lesser degree). Higher insulin levels or insulin resistance as well as higher carbohydrate intakes (this is an ill-defined concept, but for now it will be referred to as higher than 40% of calories) do not directly cause fat gain nor do they directly inhibit fat loss. People can lose all the fat they want even if they are eating a high amount of carbohydrates (they don’t have to but they can). Furthermore, high carb intakes do not elicit negative metabolic changes when in a hypocaloric state, in fact, there is almost always improvements in important metabolic markers (such as fasting glucose, insulin sensitivity, cholesterol, inflammation, etc). These should not be a controversial statements, particularly in 2019. Regrettably, due to things said by many people who promote low carb diets, which includes Keto, as “THE” diet, these ideas still seem pervasive. These incorrect ideas about insulin and carbohydrates is really a red herring and it can frequently lead people to focus on the wrong things. Losing weight and maintaining a healthy weight is already challenging, let’s not make it harder for no good reason.

The following will highlight some of the key studies and review papers on the topic of insulin levels as well as carbohydrate intake and its effects on fat loss that have been done over the past 20 years. These will be in chronological order and not necessarily in order of importance.

The Research (well just some of it, but enough that should make a clear and well-supported point)

“The results of this study showed that it was energy intake [calories], not nutrient composition, that determined weight loss in response to low-energy diets over a short time period.” (emphasis added)

“Results show that a high sucrose [40% of calories] content in a hypoenergetic, low-fat diet did not adversely affect weight loss, metabolism, plasma lipids, or emotional affect.” 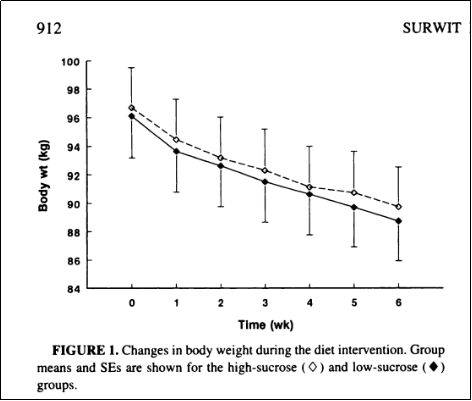 “It is concluded that the ability to lose weight on a calorie-restricted diet over a short time period does not vary in obese, healthy women as a function of insulin resistance or hyperinsulinemia.”

2006-Differences in glycaemic status do not predict weight loss in response to hypocaloric diets in obese patients. Clinical Nutrition; 25(1):117-22

2010-Does the presence of metabolic syndrome [MetS] influence weight loss in obese and overweight women? Metabolic Syndrome and Related Disorders; 8(2): 173-178

“The hypocaloric diets with different protein/carbohydrate ratios produced similar changes in weight…The present study…supports the theory that the macronutrient composition of a diet does not influence weight loss, body composition or improvements in insulin resistance.”

Two final papers before wrapping it up.

First is a very recent meta-analysis of 32 high quality randomized controlled feeding studies with isocaloric substitution of carbohydrate for fat.

The following is the summary chart from page 15, which gives a good visual of the different effects of low and high carb diets on weight loss. 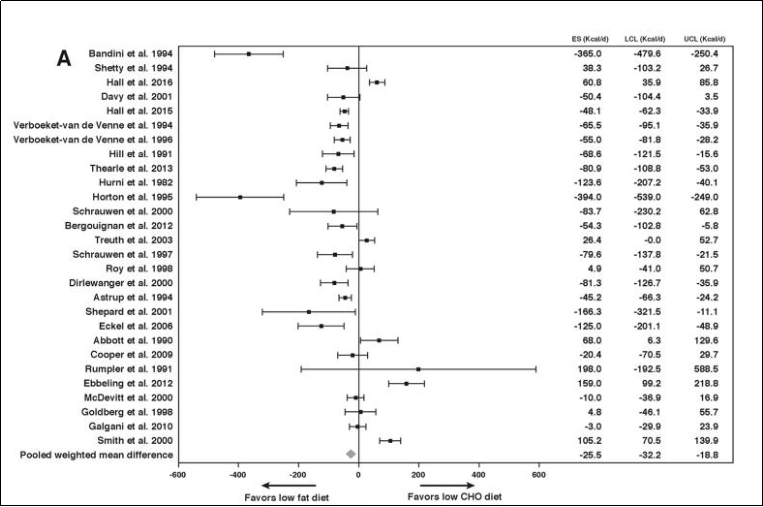 The authors conclude, “…our meta-analysis of 32 controlled feeding studies with isocaloric substitution of carbohydrate for fat found that both energy expenditure (26 kcal/d; P <.0001) and fat loss (16 g/d; P <.0001) were greater with lower fat diets.”

To be clear, the difference in fat loss is very small and is not clinically significant. However, the key take-away from this meta-analysis is the fact that low and high carb diets have almost the same weight loss benefits and high carbs diets do not inhibit fat loss.

Second, and finally, is a recent, large, high-quality study that looked at this question. Here are the details. It was an extensive study, so a bit more quoting and details are highlighted.

2017-Effect of low-fat vs low-carbohydrate diet on 12-month weight loss in overweight adults and the association with genotype pattern or insulin secretion: The DIETFITS randomized clinical trial. JAMA: 319(7): 667-679

What is the effect of a healthy low-fat (HLF) diet vs a healthy low-carbohydrate (HLC) diet on weight change at 12 months and are these effects related to genotype pattern or insulin secretion?

In this randomized clinical trial among 609 overweight adults, weight change over 12 months was not significantly different for participants in the HLF diet group (−5.3 kg) vs the HLC diet group (−6.0 kg), and there was no significant diet-genotype interaction or diet-insulin interaction with 12-month weight loss.

There was no significant difference in 12-month weight loss between the HLF and HLC diets, and neither genotype pattern nor baseline insulin secretion was associated with the dietary effects on weight loss.”

“Briefly, the main goals were to achieve maximal differentiation in intake of fats and carbohydrates between the 2 diet groups while otherwise maintaining equal treatment intensity and an emphasis on high-quality foods and beverages. Thus, participants were instructed to reduce intake of total fat or digestible carbohydrates to 20 g/d during the first 8 weeks. Higher priorities for reduction were given to specific foods and food groups that derived their energy content primarily from fats or carbohydrates. For example, the reduction of edible oils, fatty meats, whole-fat dairy, and nuts was prioritized for the healthy low-fat group, whereas the reduction of cereals, grains, rice, starchy vegetables, and legumes was prioritized for the healthy low-carbohydrate group.

Then individuals slowly added fats or carbohydrates back to their diets in increments of 5 to 15 g/d per week until they reached the lowest level of intake they believed could be maintained indefinitely. No explicit instructions for energy (kilocalories) restriction were given. Both diet groups were instructed to (1) maximize vegetable intake; (2) minimize intake of added sugars, refined flours, and trans fats; and (3) focus on whole foods that were minimally processed, nutrient dense, and prepared at home whenever possible. Other components of the emphasis on high-quality food for both diet groups are described elsewhere.” (emphasis added) 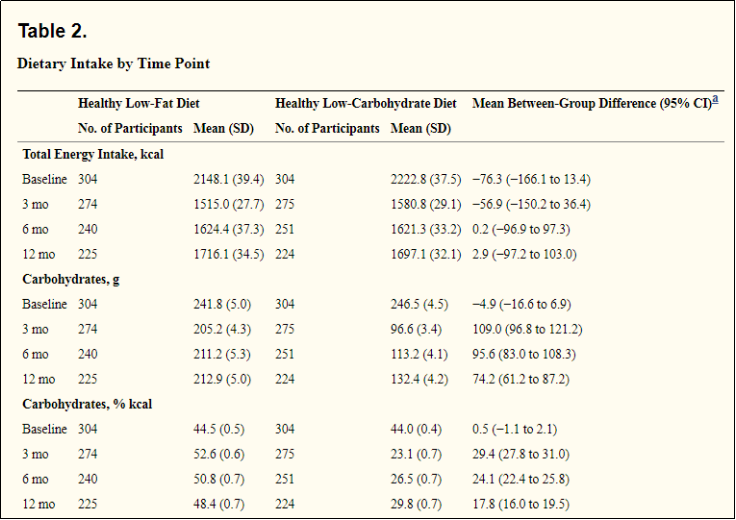 Before concluding I want to make it clear, low carb eating is ONE possible good option. For some people in certain situations, low-carb, including keto (although these can have different effects as well), may have some additional positive metabolic effects (ie., BP, blood sugar, triglycerides, etc) when compared to higher carb diets during weight maintenance (eucaloric state). During weight loss (hypocaloric state), however, there are no advantages to either low or high carb diets, since calorie restriction and subsequent fat loss seems to produce all or most of the metabolic benefits, regardless of macronutrient amounts and even the quality of the diet. Additionally, low carb diets do not produce more fat loss and they are not automatically easier to follow than a higher carb diets.

Insulin and carbs are not the boogeymen they can be portrayed as (by many low carb/keto people). A convergence of evidence over many decades, particularly the past 20 years, has clearly shown that calories is the number one factor that determines fat loss (and fat gain, btw). How people can be consistent with creating a calorie deficit, which can be difficult, can vary widely, and a wide range of macronutrient intakes as well as meal frequency (to name a couple major variables) can influence this. Furthermore, it does not have to be one eating plan forever. There is nothing wrong with changing things up. This could be needed due to changes in life circumstances or just for the sake of doing something different which can have psychological advantages. Feeling like there is only “one” way to lose weight can have many negative effects on psychological variables such as motivation and adherence. When it comes to fat loss, the only real “magic” to any eating plan is if it helps a person consistently eat the number of calories that elicits a pace of weight loss they want. At the end of the day, when it comes to losing fat, it’s about consistency.

It’s NOT about Insulin!
Tagged on: carbs    fat loss    insulin